The things we do for our children!! So yesterday, after a full day of work and a workout I headed to the kitchen to cook dinner. I knew today baby A. was heading back to class and I had sort of planned a bento in my head. After cooking the components, which were fairly easy, all I had to do was assemble it. I debated whether or not to wait until very early this morning to put it all together like I did last time, but decided I would just go ahead and leave it ready.

After we finished dinner I went back into the kitchen and what proceeded was a two hour bento assembly. I had to cut each little petal by hand, then set it all so it would look like a sunflower. Then I had the great idea of making a cherry tomato stuffed with a creamy cheese filling which I had dyed blue, just to have baby A. try it and say she didn’t like it -_- so that got scrapped (win some, lose some). By the time I finished all I wanted was a bed, but of course baby B. wanted to breastfeed (we are almost done breastfeeding, but she still gets a night feeding). Needless to say I ended up TIRED, so I don’t think I will be making sunflowers very often (or ever again). By the way this is what the adult version of her bento looks like: 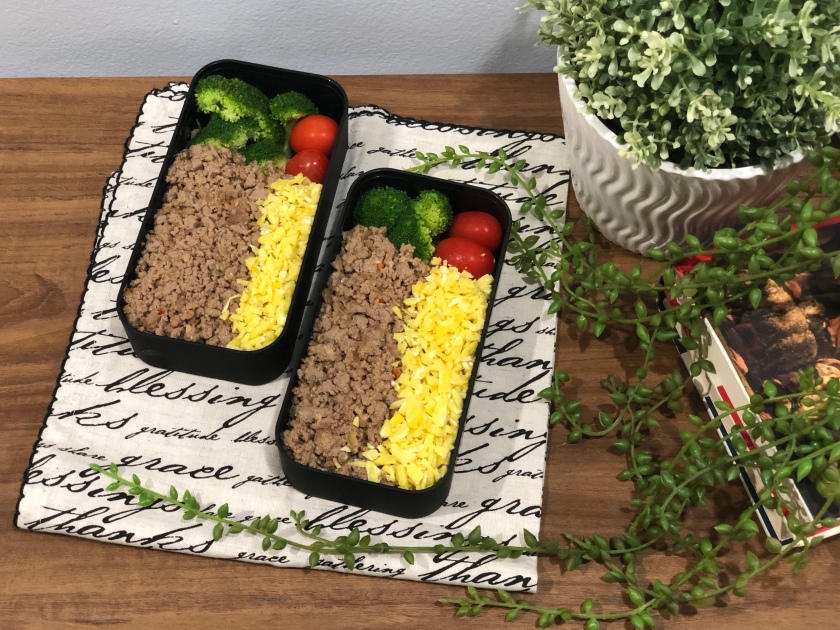 How to make the bento:

In essence this is a soboro bento. I made it with ground turkey to which I added half a ground bell pepper (gotta sneak those veggies in for picky kids and husbands), half an onion, garlic, soy sauce, and sake. The egg on ours is the cutouts of baby A’s bento which I finely chopped. I finished the whole thing with veggies and fruits, and that is all she wrote!