The second day dawned beautifully. It was a nice temperature in Florida (for once) and my toddler was just soooo happy to be out and about all she did was run from the moment she woke up. Our itinerary for this day was to have breakfast in the camp, then go to the Renaissance Faire that was taking place in the same park as the one we were in.

But before we went off to see knights and princesses we needed a sturdy breakfast to get us through all the walking we had to do (and let me tell you it was A LOT of walking).

Since it was so early in the morning and most of my family was still asleep I did not feel like starting a fire, so I opted for the easier way, and just lighted the charcoal grill that is provided in every campsite (we had brought a bag of charcoal with the idea of my husband, the grilling master, making some burgers). I also brought a small cast iron pan and a disposable baking sheet which I used to cook this breakfast.

Breakfast Casserole On The Grill —
Keep in mind that I am cooking for a large crew of 11, so if you need less then reduce the recipe accordingly.

Place your cooking receptacles on the grill to get them nice and hot (in my case the mini cast iron pan and the disposable baking sheet). Cook bacon until nice and crisp, take out and crumble, set aside. Put a good amount of vegetable oil in the disposable baking tray, once hot add the diced potatoes, cook until they start to soften, get rid of some of the excess oil, add the sausage but make sure to crumble it as you are adding it in, also add the onion. Cook until the potatoes are all the way soft, the onions are translucent, and the sausage is mostly cooked through. 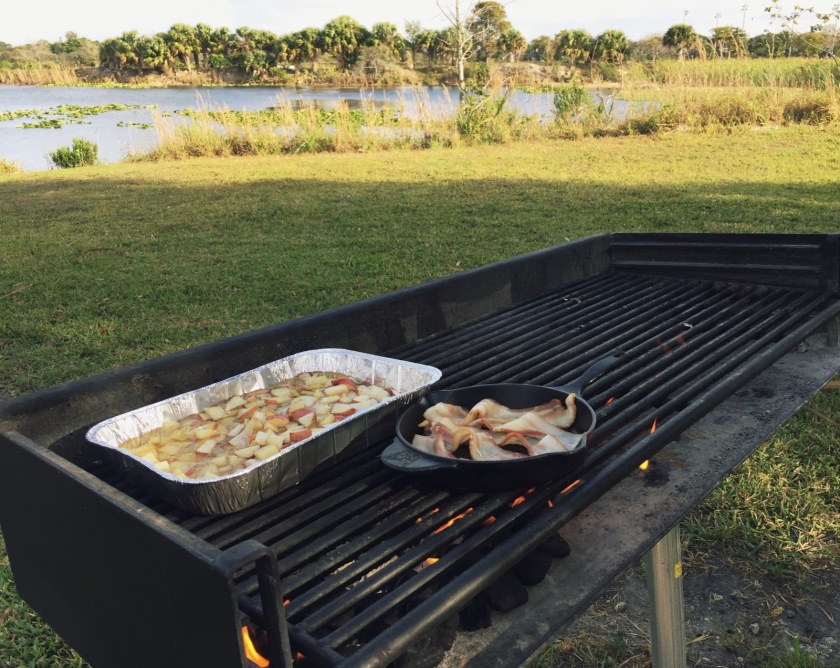 At this point I added salt and pepper to taste (I also had some seasoning mix left over from the night before, see here, which I added for extra flavor), crumbled bacon, and the package of hashbrowns. Mix well, it is ok if the potatoes break a little. Once everything is thoroughly mixed sprinkle generously with cheese. Cover with aluminum foil and cook for an extra 15 minutes to make sure everything is cooked through and the cheese has melted all over.

Serve while warm, that is when it is best! We also made scrambled eggs and toast to go with it, but the casserole is pretty sturdy on its own. You can also add the scrambled eggs to it right before you put the cheese and it would be a complete breakfast.

After we finished breakfast we all took a long and arduous trip back to Renaissance times. Get ready for a bunch of unedited pictures! Yay!

Where my daughter decided she was a princess; 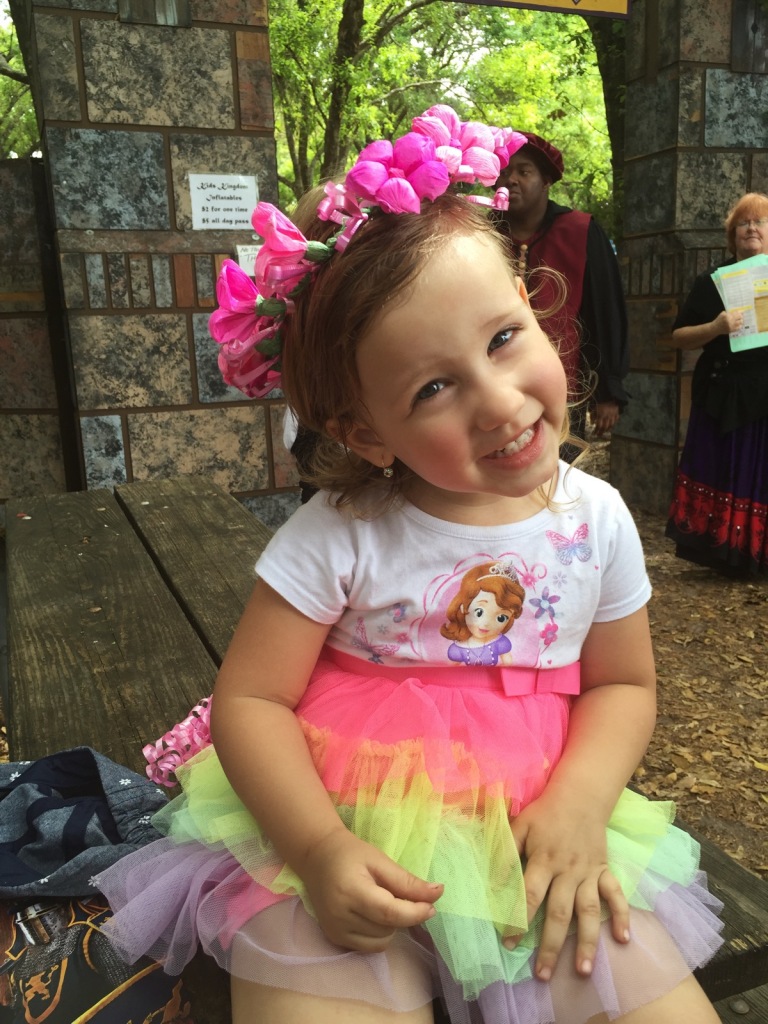 There we saw knights; 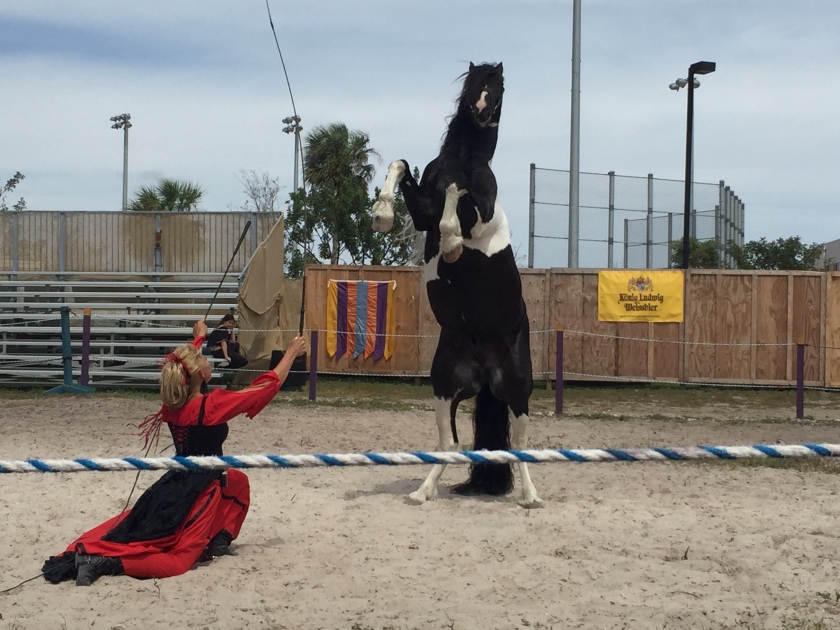 And the king and queen of the Fair! 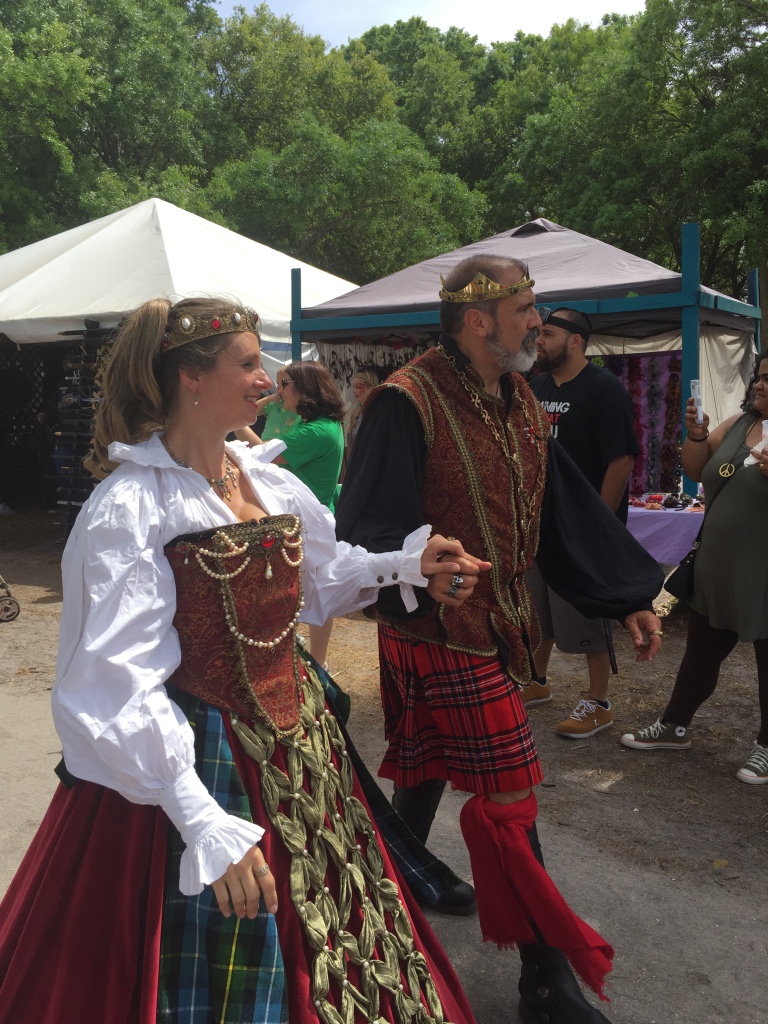 After this adventure our little princes fell asleep and we had a long trek under the fiery Florida Sun back to camp with a sleeping toddler in our arms. We had fun, but honestly wish that it all had been a little less crowded and that the weather had remained nice as it was when we woke up!

That night I made a Cuban Caldoza to soothe our tired souls. Come back tomorrow for the recipe!